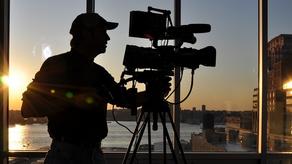 Georgian Film Cluster was founded in 2017 with the support of the European Union and the German Society of International Cooperation.