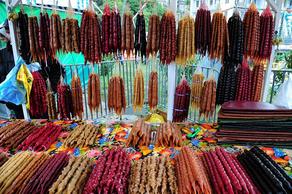 One of the Georgian national, traditional sweets Churchkhela is becoming more and more popular in Georgia and outside its borders as well. It is on sale in various foreign online shops. The product is also realized via social media.

The family-made national sweet of Georgia provides an opportunity to be sold across the globe with success.

One piece of Churchkhela costs about 2,50 – 3,00 GEL at the local market. Its maximum price may hit 6,00 GEL while its lowest price is 7 USD when exported.

The Churchkhela producers say the popularity is caused by its nutrient values but also add that Churchkhela, as an exotic type of food is becoming more and more popular across the world.

Report.ge interviewed several small entrepreneurs living in the Georgian region of Kakheti that sell the product at the local and foreign markets.

As it was observed, Churchkhela is not 100% natural as imported raw materials are often used when making it.

Tsisana Laghadzishvili from the town of Sagarejo says that she receives orders and makes Churchkhela. The first cost of each piece is 1,20 – 1,50 GEL in average. It increases according to the product quality.

‘The demand on Churchkhela is very high… We make hundreds of Churchkhelas per season. Now the production process has mitigated for a while due to the lack of raw materials. We are waiting for a new batch of walnut from Ukraine. Mostly Ukrainian walnut is used when we make Churchkhela. The price starts from 2 GEL and increases according to the quality,’ Lagadzishvili states.

As producers report the demand on Churchkhela has increased on foreign markets but no data are available on it at the official website of Geostat.

To note, Sakpatenti registered Churchkhela with a protected geographic name based on the application by the Agriculture Ministry of Georgia.