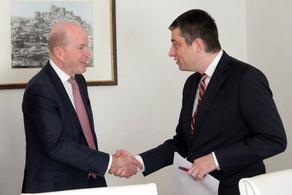 The parties discussed the prospects of a strategic partnership under an updated mission.

They highlighted the attractive investment environment in the country and long successful cooperation between Georgia and BP.

Gary Jones emphasized the activity conducted in the south Caucasus pipeline and the completion of the central part of the Shah Deniz project.

By the end of 2020, the project will provide Europe with natural gas via Georgia.

PM Gakharia informed Gary Jones on the vision of the Georgian government regarding its importance as a regional hub and spoke about the needs of the country in terms of energy security.

The company official showed readiness to discuss opportunities to collaborate with Georgia in the future.

The parties also discussed the upcoming plans of the BP company, as it plans to reduce CO2 emission during current operations significantly.

The parties noted that the company transformation might give great benefit to Georgia, as BP's interest in the production of renewable energy increases in the region.

The BP Company has been operating in Georgia since 1996. It is one of the largest investors in the country.