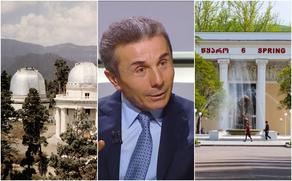 Founder of the ruling Georgian Dream Party Bidzina Ivanishvili has publicized his plan for modernizing Tskaltubo Spa Resort. According to Ivanishvili, the destroyed and now lifeless resort is impossible to be pulled out from stagnation and developed by use of a standard approach. As Ivanishvili maintains, a powerful catalyst is a must to make the project sustainable.

Mr. Ivanishvili also declared that total investments carried out in Abastumani, along with which Tskaltubo resort is set to be developed, has already hit a billion and a half GEL, with its unique baths being restored, cafes and restaurants being built and shopping areas being developed.

Bidzina Ivanishvili has stated that he is planning to purchase 22 hotels and 9 baths and rehabilitate them entirely within the framework of the resort development plan. How does he intend to purchase these hotels has remained unknown so far.