How did BTK Railway operate during pandemic? 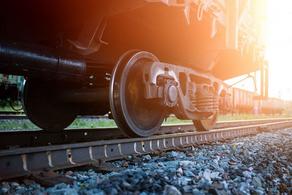 During the novel coronavirus pandemic, the Baku-Tbilisi-Kars railway operated in a regular mode and transported 138000 tonnes of cargos, Ahmet Arslan, former Transport Minister of Turkey, and Turkish MP said at the Kars Logistic Center opening ceremony.

The center has already started operation, while it will commercially function by the end of 2020.

The center is to provide the BTK railway with service, which connects the Turkish railway system with the Georgia-Azerbaijan railroad.

''The trains, carrying cargos from China, Russia, Azerbaijan, Georgia, Kazakhstan, Turkmenistan, Uzbekistan, and Kyrgyzstan, can enter here and reload their cargos on the cars heading to Europe,'' Ahmet Arslan stated.

Notably, the cargos' transportation time via the highway gradually decreases.

The cargo owners show a higher interest in the highway. In June, new cargos were transferred via the BTK railway.

Amid the novel coronavirus pandemic, using the BTK transport corridor, Turkey succeeded in maintaining cargo turnover with its trade partners.

The railway has become one of the key hubs for Turkey.

The Baku-Tbilisi-Kars railroad will shortly start functioning in full capacity, as the work is intensely underway.

Following the document developed by the Georgian ministries for the years of 2021-2024, the Georgian government plans to purchase private land plots in Marabda, Akhalkalaki, and Kartsakhi and pay compensation to the owners.

The document also reads that the government plans to build protective structures to prevent landslide on the railroad.

The government of Georgia has already presented both documents to the Parliament.

Baku-Tbilisi-Kars rail line opened on October 30, 2017. The railroad line connects Asia with the European railroad net. It is not the shortest way of connecting only three countries but also connecting Asia and Europe. This railroad connects Turkey, Kazakhstan, Uzbekistan, Kyrgyzstan, Tajikistan, and Afghanistan with European and world markets.