Irakli Beraia: Georgia and Azerbaijan are united by international energy and transport projects

Irakli Beraia: Georgia and Azerbaijan are united by international 25 September, 2020  11:25 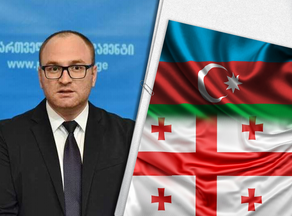 "Azerbaijan is our strategic partner. We have strong neighborly relations," said Irakli Beraia, the Chairperson of the Foreign Relations Committee of the Parliament of Georgia, commenting on a meeting with the Minister of Foreign Affairs of the Republic of Azerbaijan.

According to him, in addition to close cooperation in a bilateral format, Georgia and Azerbaijan are united by international energy and transport projects of great importance.

Beraia said that the strategic partnership of Georgia and Azerbaijan and neighborly relations would ensure the successful implementation and effectiveness of these projects and the opportunity to implement many new ones.

"Azerbaijan supports the resolution adopted by the United Nations General Assembly every year. Of course, we talked about all the important issues," the Chairperson of the Foreign Relations Committee said.

Beraia also responded to the statements made by the Foreign Ministers of the two countries regarding the activities of the Joint Commission on Delimitation-Demarcation of the Georgian-Azerbaijani border.

"I agree with the statements made by the official representatives of two strategic partners - Georgia and Azerbaijan. The Minister of Foreign Affairs of Georgia mentioned that the Commission is working. As the Minister said, some documents have been provided to our partners, which is a common practice. The Azerbaijani Foreign Minister made it clear in his statement that there are no unresolved issues between the two countries," Beraia said.