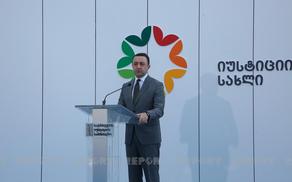 The Gardabani House of Justice opened today, June 24. It is the 4th branch in the Kvemo Kartli region, which has replaced the old, Soviet-era infrastructure with a new, modern European building. Its area covers up to 1000 square meters. The branch, along with service areas, also has a wedding hall.