Kaladze - Tbilisi can’t be a city for SUVs alone 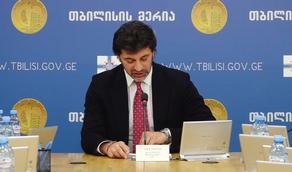 "Tbilisi can't be the city of SUVs - Tbilisi will definitely be the city of pedestrians", Kakha Kaladze, the Mayor of Tbilisi said at a government meeting.

The Mayor of the capital talked about the activation of zone-hourly parking on Orbeliani Square since October 1, noting that the project will be activated in various areas of the city as well.

According to him Cab reform, as well as the introduction of zone-hourly parking may not be a popular move, but implementing those reforms is vital to the capital and is a public order.

The Mayor of Tbilisi thanked the population for their patience and support during the ongoing infrastructure projects in the capital.