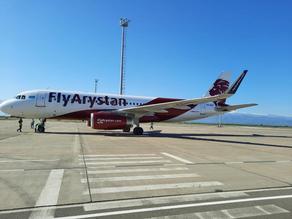 Kazakh low-cost FlyArystan company has conducted its first regular flight to Georgia. The AIRBUS A320 aircraft brought 140 international visitors from Atyrau to Kutaisi.

The passengers were given symbolic gifts at the Kutaisi airport.

It is the first Kazakh low-cost company that celebrated its second anniversary. It is an affiliate of AIR ASTANA.