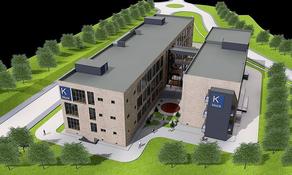 Kutaisi International University will receive its first students in 3 educational programs in September 2020.

The presentation of new educational space of the University funded by Cartu Foundation was attended by the by Bidzina Ivanishvili, the Chairman of the Georgian Dream, Prime Minister Giorgi Gakharia, President Salome Zurabishvili, Chairman of the Parliament  Archil Talakvadze and executive and legislative authorities, scientific and academic communities and Cartu Foundation representatives.

The project of Kutaisi International University is fully funded by Cartu Fund and its estimated budget is 1 billion euro.
According to Mikheil Chkhenkelin, the Prime Minister's Adviser on Education issues, the University will host not only Georgian, but European, American and Japanese lecturers as well, who will deliver lectures both in the auditorium and online.

“Together with Georgian professors, the lecturers from world leading universities will deliver lectures at Kutaisi International University, such as Professors from Germany, other European countries, the United States of America and Japan. Foreign professors will deliver lectures both in the auditorium and online”, said Mikheil Chkhenkeli, Prime Minister's Adviser on Education.

Students will be able to choose mathematics, computer science and management programs in the fall of 2020.

“Students will be able to choose math, computer science and educational programs. All three courses will be taught in English, afterwards according to the concept of academic development of the university - both master's and doctoral programs will be added, as well as the range of specialties will be expanded, ”said Professor Aleko Tevzadze, Rector of Kutaisi International University.

Buildings of 170,000 square meters are being built in the first phase of the project, including 3 study buildings, 3 student dormitories, a residential building for professors, a library and a canteen.

According to Cartu, two additional educational buildings will be built in the following stages - a modern therapy center, a university clinic, laboratories and other research facilities.