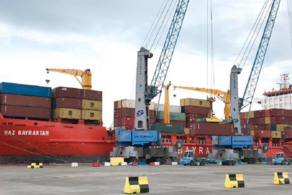 In the aftermath of the Russia-Ukraine conflict, transit market specialists suggested transporting Central Asian cargo through Georgia's shipping corridor. This should have been the most effective direction to avoid passing Russia on the way to Ukraine. According to them, their assumption was not justified. Cargo and traffic flow specialists spoke to Report.ge about the reasons.

Economics expert Emzar Jgerenaia tells Report.ge in a telephone interview that the reason for Georgia's low impact on any sea route is the incorrect and unprofitable pricing policy of Georgian ports. According to him, Georgian dock fees are usually 6-8 times higher than those of our competitors. Due to the high cost, cargo owners are trying to find alternative ways of transportation.

"At our port, the fee of the Ukrainian ferry Ro - Pax Vilnius is 20,500 USD a similar operation at Batumi port is 19,500 USD .The fact is that the dock fees are six times higher in Georgian ports, which automatically increases the carriage rates for wagon and trailer on the ferry. 1800 USD for a trailer, 3300 USD for a carriage", said Paata Tsagareishvili, The president of the Transport Corridor Research Center.

Specialists argue that cargo shipments through Georgia are unprofitable for both foreign and Georgian cargo owners.

Why is ferry traffic in the Baltic Sea cheap? The specialist's answer to Report.ge:

“First of all, it should be due to the flexible system of adequate tariff reduction at the expense of increased number of ships implemented in Baltic ports. In addition, it is necessary for the our country to buy the ferry ship in the shortest possible time, the specifications of which, according to specialists, was written in a four-point program, but the economists state that this problem remains unsolved”.