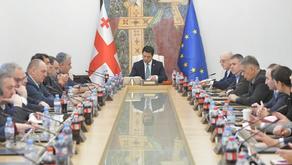 Several lawmakers, including Viktor Japaridze, Dachi Beraia, Mikheil Kavelashvili and Dimitri Khundadze, applied to the Bureau of the Parliament to register the initiative group to prepare constitutional amendments. Archil Talakvadze, the Chairman of the Parliament of Georgia stated at the Bureau meeting.

Guram Macharashvili, the Chairman of the Procedural Issues and Rules Committee, said that the issue will be discussed and blanks will be given to the initiative group to collect signatures.

Part of the majoritarian deputies want to introduce a two-chamber Parliament after 2020. According to Dachi Beraia, a Georgian Dream Deputy, the proposal implies not to a fully majoritarian system but an American electoral model and will require constitutional changes.