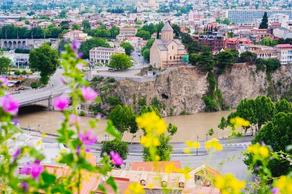 ''Tbilisi was named as the Best Cultural City of 2020 at a contest conducted in Berlin,'' Tbilisi Mayor Kakha Kaladze said today.

In his words, the victory of Georgia's capital at the LCD Berlin Awards and VisitBerlin joint ceremony is of utmost importance.

Kakha Kaladze thanked all the bodies involved in preparation for the contest.

''It is an essential victory and a step forward,'' he added.

Kaladze said the victory would directly influence the growth of the tourist number, which will lead to the development of small and average business in Tbilisi.

''I am proud of being a Mayor of the city with ancient traditions and culture,'' he stated.

A total of 50 cultural directions, including Tbilisi, participated in the sixth award ceremony in Berlin, Germany.