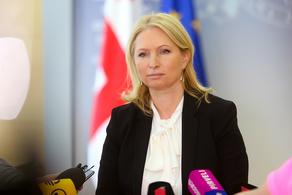 “Despite the COVID-caused global economic crisis, the volume of direct British investments has increased by thirty percent,” – said the Ministry of Economy and Sustainable Development, Natia Turnava, in the meeting with Mark Clayton, Ambassador of the United Kingdom of Great Britain and Northern Ireland.

It was the first meeting with the Ambassador after his appointment in August 2020.

“It is important to mention that Britain is the country to directly invest 32% of all foreign investments accomplished in Georgia in 2020. British companies expressed interest in Georgian energy and transport sectors as well as various infrastructural and high-tech projects. Aiming at the attraction of British investors in Georgia, we agreed to cooperate in the frames of pro-active investment policy,” –the Minister said after the meeting.