President Zurabishvili: Joint efforts will cure wounds of past

President Zurabishvili: Joint efforts will cure wounds of past 27 September, 2020  15:56 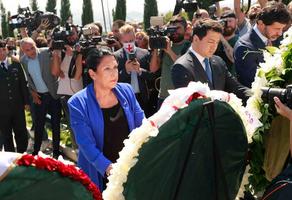 ''The past years made us see no winner in the war between brothers but an enemy,'' Georgian President Salome Zurabishvili said.

She made this statement at the monument constructed in memory of the heroes fallen in the Abkhazia-Georgia conflict in 1992-1993.

In her words, the success can be achieved only via unified attempts.

"Abkhaz people and all other Georgian nationals should realize that we can cure the wounds of past only with joint efforts, to lay a foundation for the bright tomorrow of our future generations,'' Zurabishvili said.

Twenty-seven years have passed since the fall of Sokhumi, the central city of Georgia's Abkhazia region, which remains Russia-occupied.

It was the end of an armed conflict between Georgians and Abkhazians in 1992-1993.