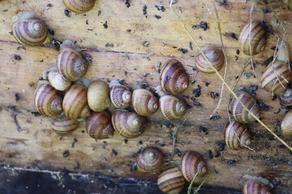 Nadi Group enterprise operating in Akhali Khobula village of Khobi municipality was built in the framework of the United Agroproduct program.

According to the Ministry of Agriculture total investment of the enterprise was 1,410,000 GEL out of which 1,260,000 GEL was the concessionary agro loan taken by the beneficiary.

Report.ge identified that the current year price of the product varies 40-50 GEL per kilo while the last year it was 15-25 GEL.The demand from the local restaurants is high.

Breeding escargot is not easy job.Merab Nadiraia, the founder of Nadi Group, told the Report.ge that escargot require permanent care.

“They need feed and water and corresponding condition: they hide in ground when it is hot, eat and reproduce during humid and cool nights.They reproduce twice a year laying 30-50 eggs.New mollusks appear in two weeks after the eggs are laid which are ready for consumption in 7-8 months. During a few days before selling escargot are given cereals and water to clean their intestines.Soon they develop a membrane which means they are ready for sale. There is a big demand on escargot.We imported the stud escargot from Italy.Italians take the responsibility for export and sale.” – said the entrepreneur.

Nadi Group has been producing escargot for 2 years.The first export to Italy was accomplished in May this year.The volume of export was 5 tons. This year it is expected to produce 20 tons of the product.The entrepreneur made decision to produce escargot after conducting the study of the export market.According to him there is big a demand on escargot both from food industry and pharmacy.

The Head of the Nadi Group faced a dilemma 2 years ago: either produce frogs or produce escargot.The decision was made in favor of escargot based on the market analysis which showed 40% of unmet demand.

“The product is very useful with high protein and zero cholesterin content.Consequently, it is useful and many countries started its active consumption.Initially the main consumer was France.During the last 15 years Italy, Portugal, Spain and England developed demand in this product. The industry is being developed in America and China. We also studied the industry related costs.Initial investment is very big as the stud samples need to be purchased and delivered which is 30% of the initial investment. Despite that the investment needed is high it has high return on investment in one-year period. Georgian escargot are already being sold on local market.There is also interest in the product from Dutch pharmacies. The mucus of escargot is used in cosmetic industry.We ordered equipment for mucus production and soon we will start production and sale of mucus in line with the meat.” – stated the founder.