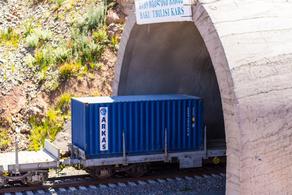 A 4,450 meter-length border railway tunnel links the Georgian and Turkish sections of the new Baku-Tbilisi-Kars railroad.

The border of Georgia and Turkey is inside the tunnel.

The tunnel length in the territory of Georgia equals 2,070 meters.

The tunnel meets all security and technical requirements.

As the BTK Georgian administration reports, the tunnel project includes a safety room for the passengers, equipped with ventilation wells.

As a reminder, the construction of the Akhalkalaki international railway station is intensely underway.

A unique equipment to transfer freight wagons from 1,520-mm to 1435-mm gauge rails (European standard) has been installed at the Akhalkalaki international railway station.

The mobile station for freight situates in an area of 11,340 m2.

The Akhalkalaki international railway station area is 102 hectares, including premises for the station staff, among other facilities.

The works on the Georgian section of the Baku-Tbilisi-Kars railway in the alpine zone have been underway intensely all summer long.

On the Georgian section of the BTK railway, a mechanized point for unloading heavy, big containers was installed. The construction of snow-protective galleries is also on the agenda.

As the Trend news agency reports, Turkey received another batch of Turkmenistan-produced propylene via the Baku-Tbilisi-Kars (BTK) railway line.

The administration of the Georgian party of the Baku-Tbilisi-Kars railway says that currently, the direction of cargo transportation via the BTK is in a test mode.

The question on the Baku-Tbilisi-Kars railway full-capacity operation remains unanswered.

The audit report, conducted in 2018, shows that the highway's work in phases 1-3 is completed by more than 80%.

Two years have passed since then, and these indicators have allegedly increased, but there is no official data on them yet.

As the Georgian Railway reports, the tariffs for the Azerbaijani and Turkish sections have been calculated. Construction is over in Azerbaijan, while Turkey is on the final stage.

A logistics center in Kars has already launched an operation and hosted the first train. Full commercial operations will launch by the end of 2020.

The full commissioning of the Baku-Tbilisi-Kars (BTK) railway is on the agenda, as parties continue working.

Notably, the time of transportation of goods on the BTK continuously decreases.

The interest of cargo owners in BTK is also growing. In June, the transportation of new types of cargo began on this railway.

The Baku-Tbilisi-Kars railway has made a significant contribution to maintaining the level of Turkey's trade with the outside world during the coronavirus pandemic.

The Baku-Tbilisi-Kars railway opened on October 30, 2017.

The railway line connects the rail networks of Asia and Europe. It is the shortest route between the three countries (Azerbaijan, Georgia, Turkey) and between Asia and Europe.