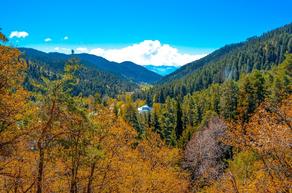 The Sanatorium Arazindo will become Rooms Hotel Abastumani from 2021. Adjara Group plans to invest 10 million in this project employing 150-180 people. The construction of Arazindo was planned and started during the reign of Nicholas II of Russia in the 1910s.

Inscriptions on the iron balcony of the main facade and mosaic floor in foyer of the Arazindo show that construction was completed in 1924. The Sanatorium was a prominent treatment and recreation center for tuberculosis patients throughout the Caucasus Region.

Valeri Chekheria, the CEO of Adjara Group talked about the Arazindo building and concept for the Rooms Abastumani with Report.ge. According to him Abastumani soon will become one of the most unique destinations for both Georgian and foreign visitors.

Chekheria said that the sanatorium built in 1924 fits the concept of Adjara Group.

"The restoration work will be carried out to preserve the historic look of the building. We will revive the unique architecture. Restoration involves restoring the existing details of the building and returning the original visuals", Valeri Chekheria said.