SOCAR names cause of explosion in the Caspian Sea 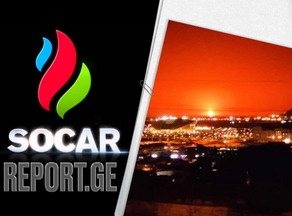 According to SOCAR, the explosion in the Caspian Sea on July 4 did not damage any industrial facilities of the State Oil Company of Azerbaijan.

"All offshore platforms and industrial facilities of the company continue to operate as usual," SOCAR said in a statement.

In addition, SOCAR sent its staff to the scene to investigate the cause of the fire.

According to SOCAR, the natural burning of gases from a mud volcano was observed on the island of Dasli, located in the Caspian Sea, between the village of Alat and the town of Neftchala.

A powerful explosion occurred in the Caspian Sea. The explosion was so large that it could be seen from Baku.

It was reported that the explosion took place at the Umid gas field, where SOCAR carries out the works. However, the company said the blast in the Caspian Sea had nothing to do with SOCAR-controlled facilities.