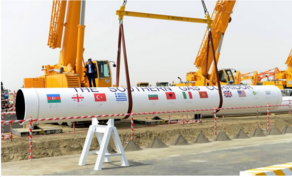 The Online EU-Azerbaijan Business Forum has been held today, with its one of the clear messages being that, despite the global pandemic, The Southern Gas Corridor (SGC) project is coming to an end. The Head of the EU Delegation Kestutis Jankauskas has released this information at the online meeting.

The SGC is the second non-Russian pipeline enabling the transportation of the natural gas to the European market and entirely fitting into the energy security policy of Brussels.

The Southern Gas Corridor project aims at the transportation of Azerbaijan gas to Europe via Georgia and Turkey.

Initially, Turkey will be supplied with 2 to 6 bcm of Azerbaijan natural gas. After 2020, when the TAP officially joins the SCP and the TANAP, 16 bcm of gas will be transported through the corridor, out of which Italy will receive ten bcm.

The project comprises the key components as follows: the Trans-Anatolian Natural Gas Pipeline (TANAP) and the Trans Adriatic Pipeline (TAP).

Detailed information on the TANAP, TAP, and the Southern Gas Corridor is available on Report.ge.