The state has spent more than GEL 60 million on grapes 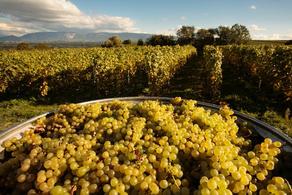 According to Levan Davitashvili, the Minister of Environment and Natural Resources Protection of Georgia said that the state-owned company Akura has purchased Rkatsiteli grapes worth more than GEL 60 million. Minister explained that the intervention was caused by a record harvest.

Davitashvili said that Rkatsiteli crop is about 170 thousand tons, from which a certain amount was bought by the state company.