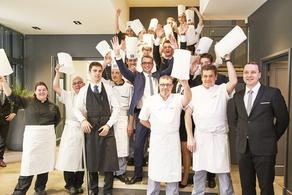 Georgia's first Tourism Institute Vatel goes through the latest details of the curriculum agreement. The school will be located in the building of the Georgian National University. Vatel college admissions were scheduled for February 2018 but due to technical reasons the process was delayed. The project is jointly implemented by Block Group and Georgian National University.

“We have written to the Ministry of Education a system according to which tourism should be taught in all institutions. This program has already passed one hearing. If the curriculum is in our favor, Vatel will be open by 2020”, Tornike Janashvili, CEO of Block Group said.

According to Janashvili, bachelor’s degree requires a 3-year course in Vatel. Every second semester is an internship at various international hotel positions. According to Tornike Janashvili, tuition fee is quite affordable probably $ 5,000 a year.

A total of $ 2 million is being invested in the project.

A contract was signed with Vatel, the world's largest French University in the tourism sector in 2017, according to which the Block Group and the Georgian National University (SEU) were granted the exclusive right to work in Georgia and Armenia.