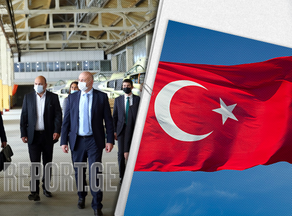 The Deputy Minister of Defense of Georgia Zurab Azarashvili and General Director of Tbilisi Aircraft Manufacturing Mikheil Oghlishvili hosted the Turkish delegation visiting Georgia, CEO of Turkish Aerospace Industries and Vice President of Aviation, report.ge was informed by the Ministry of Defense.

According to them, the sides discussed cooperation between Georgia and Turkey and future plans to establish a joint venture and develop the military aerospace industry.

After the meeting, the guests inspected the aircraft equipment assembly plant on the territory of Tbilisi Aircraft Manufacturing, where the aircraft is being restored, rehabilitated, and modernized in accordance with modern standards.