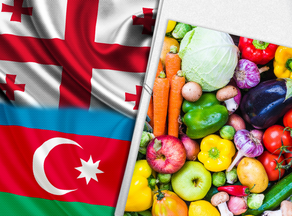 According to the National Statistics Office, Georgia sold 1,122.8 tons of potatoes in the Republic of Azerbaijan in the first eight months of the current year. The value of fresh or frozen potatoes exported to Azerbaijan under the trademark 0701 is 195.8 thousand dollars. Exports were made in January, February, March, June, and July. Products entered the neighboring country by road.

Simultaneously, 40.0 tons of tomatoes worth 15.3 thousand dollars got exported to neighboring Republic of Azerbaijan under the trademark 0702. Products entered the neighboring country by road in March.

In January, February, and March of this year, 12.2 tons of onions and garlic worth 11.8 thousand dollars were exported from Georgia to Azerbaijan under the trademark 0703.

In February, March, and April of this year, 102.5 tons of cabbage and broccoli worth 14.4 thousand dollars exported, and in June and August, 1.1 tons of lettuce and chicory worth 1.2 thousand dollars.

In the first eight months of this year, Georgia exported 22.5 tons of carrots, beets, and turnips worth 7.2 thousand dollars to Azerbaijan.

As for fresh or frozen vegetables exported under trademark 0709, in the first eight months of this year, exports exceeded 76 tons. In March, only a small part of it was transported by air, while the main part traveled by road. Exports of fresh and frozen vegetables reach $ 18.8 thousand.

Legumes were exported from Georgia to the Republic of Azerbaijan under trademark 0713 in March, April, and May of this year. The export volume of legumes is 10.1 tons, valued at $ 9.2 thousand.