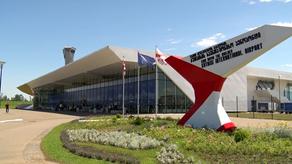 Kutaisi-Bologna-Kutaisi - from November 23, two times a week, every Tuesday and Saturday;

Kutaisi-Nice-Kutaisi - Starting from December 12, two times a week, every Thursday and Sunday.

The flights will be operated by Airbus A320 and A321 aircraft until the end of the winter season.

Wizz Air was granted a permit to operate the new airline on October 25, 2019.

Wizz Air started operating in Georgia in 2012 and has been the leading airline on the market in the past nine months.