Wizz Air says Georgian base 'to be priority' 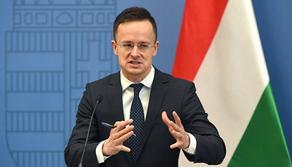 Hungarian Minister of Foreign Affairs and Commerce Péter Szijjártó is paying an official visit to Tbilisi.

He has held a meeting with Georgian Minister of Foreign Affairs David Zalkaliani.

The Hungarian Company Wizz Air's decision on closing the Kutaisi base in Georgia was one of the main topics of the conversation.

As the ministers stated after the meeting, Wizz Air remains in Georgia.

Péter Szijjártó said that the Georgian base is critical for Wizz Air.

He also added that he hopes the economic situation to improve shortly, specifying it is a 'matter of time.'

'Wizz Air will find its place in the world, and if it happens, the Georgian base will be a priority for the airlines,'' Péter Szijjártó said, adding more and more Hungarians want to visit Georgia.

'We remain in close contact with the Wizz Air officials to consistently plan the flights that will be carried out shortly,'' Zalkaliani said.