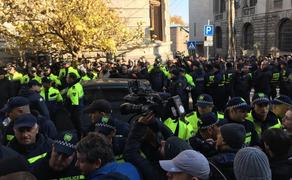 Police arrested 6 people during the rally outside the National Library. They were taken to the main police station in Dighomi. Lasha Chkhartishvili, a member of the Labor Party is among detained.

Report.ge was informed by the Ministry of Internal Affairs.

According to the agency, all 6 were arrested for violating Article 173 of the Code of Administrative Offenses (disobedience of law enforcement officers) and Article 166 (petty hooliganism).

Protesters were gathered outside the National Library building for 2 hours and waited for Tsulukiani. The Minister attended the event dedicated to the 30th anniversary of the adoption of the Convention on the Rights of the Child.

“Don’t you feel embarrassed when called a slave?”, one of the media representatives asked the Minister of Justice at the National Library where she is attending an event.

Tsulukiani stated that it would be better if the opposition focused on preparations for elections. The Minister says she is not embarrassed by the fact that they called her a slave.