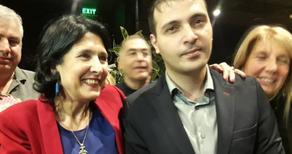 Deputy Head of the Administration of the President of Georgia Angi Khutsishvili has been summoned to the General Prosecutor’s Office. According to the investigative body, Angi Khutsishvili should appear at the Prosecutor's Office for questioning on September 26, at 12:00.

President Salome Zurabishvili pardoned a number of murder convicts on Mariamoba holiday, including the individuals convicted of murdering a 22-year-old policemen Tarash Mukbaniani, Giorgi Totkhmezuri’s son Davit Totkhmezuri and Soso Koiava. The Prosecutor’s Office launched an investigation into possible abuse of power in the process of granting paroles to Ramaz Devadze, Aslan Bezhanidze, Zurab Nadiradze and other individuals.

The Prosecutor’s Office has already questioned the Parliamentary Secretary of the President Dimitri Gabunia, who claims that precisely Angi Khutsishvili has worked on clemency lists for months.