Badri Esebua could not be charged 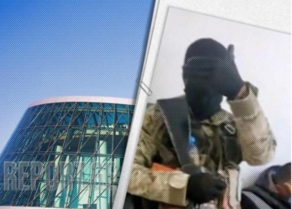 The trial of Badri Esebua, accused of robbing the Bank of Georgia, has been postponed indefinitely.

At the trial, the prosecution stated that Badri Esebua should be sentenced in absentia.

The defense claims that there is not enough evidence in the case. According to them, the conclusion of the fundoscopic and ballistic examinations is not enough to sentence Esebua to imprisonment.

A gunman broke into the Bank of Georgia in Zugdidi and took 43 hostages on 21 October. He demanded half a million dollars, a helicopter, and threatened to kill the hostages unless his demands were met. Late at night, the captor left the bank building late at night, together with three victims and $500,000. He freed all hostages at dawn and vanished without a trace.

According to the Ministry of Internal Affairs, the armed attacker at the Bank of Georgia has been identified, and he is Badri Esebua, born in 1988.

Relevant investigative actions to determine the whereabouts of Badri Esebua are ongoing.

The case of the attack on the "Bank of Georgia" is underway under the article of terrorism.