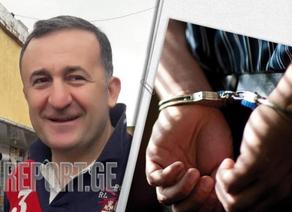 Businessman Davit Kodua has been released from prison after he posted GEL 10,000. Lawyer Mukhran Ghurtskaia says that the defendant needs to be transported for operation abroad.

''After my client's health condition worsened, we filed a motion asking the court to release him on bail. The court approved the motion and set a GEL 10,000 bail,'' the businessman's lawyer said.

The Tbilisi City Court sentenced businessman Davit Kodua to imprisonment on the charge of domestic violence on 14 April.

The formal charges were pressed on him on 13 April. Mr. Kodua was arrested a day earlier.