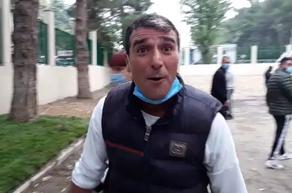 A citizen who assaulted journalist Mindia Gabadze on election day has been detained, according to the MIA.

On 31 December, journalist Gabadze was fulfilling his job-related duties at a Gldani electoral district when the recently detained citizen subjected him to verbal abuse. The aggressive citizen also kicked him in the leg after the journalist captured the scene. Gabadze dropped the phone after being kicked and failed to film the situation at the electoral district afterward.

The investigation is in progress under Article 187 (crimes involving damage to property) and Article 154 (preventing a journalist from performing job-related duties).