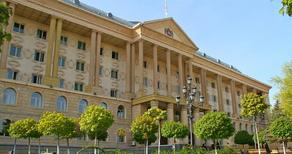 Tsotne Tsotniashvili having been arrested over 20 June case have reportedly been released, with the City Court judge having rendered the verdict after the defendant admitted the crime.

Mr. Tsotniashvili has been released in exchange of 2,000 GEL bail bond. The motion was submitted by the defendant's lawyer, and the prosecution approved it.

Zurab Budaghashvili, Tsotne Tsotniashvili, Besik Tamliani, Tsotne Soselia and Kakhaber Kupreishvili were arrested over 20 June case and accused of participation in group violence followed by a raid, violence, destruction of other's property, resistance to law enforcement officers and an attack on them.