Detainee sentenced to imprisonment for murder of mother and grandmother

Detainee sentenced to imprisonment for murder of mother and 27 February, 2020  13:27 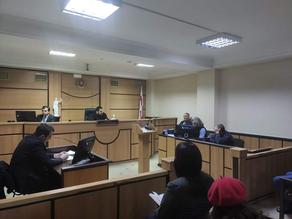 Tbilisi City Court Judge Giorgi Keratishvili sentenced a 19-year-old Mikheil Zautashvili to imprisonment, as a preventive measure for the murder of his mother and grandmother.

During the trial, the prosecution demanded a preventive measure noting the gravity of the crime. The defense also agreed to the motion. However, the lawyer said that they should investigate the psychological state of the accused.

Lawyer Tamar Gachechiladze demanded partial closure of the hearing and explained that the accused was still a school student. That is why, for his safety, it would be better to close the process partly. Although the judge did not grant a motion.

A 19-year-old boy accused of killing his mother and grandmother formally got charged yesterday.

M.Z., born in 2001, committed a premeditated murder of two or more persons in the family in aggravated circumstances. The investigation revealed that he killed Z.D., his grandmother born in 1946, and T.Z., his mother born in 1974, on the grounds of past conflict, while they were sleeping with an ax in their home in Tbilisi. The crime envisages from 16 to 20 years of imprisonment or life imprisonment.