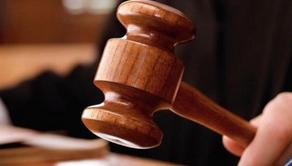 Akaki Khuskivadze and Akaki Kobaladze have been remanded in custody after being charged with a crime of subjecting late Tedo Gobejishvili, the head of the Isani District Election Commission, to threats and coercion.

Arsen Kalatozishvili, a judge at the Tbilisi City Court, rendered the verdict.

Prosecution demanded that the detainees be sent to jail, while the defense demanded bail.

The Prosecutor's Office of Georgia officially brought charges against the detainees today.