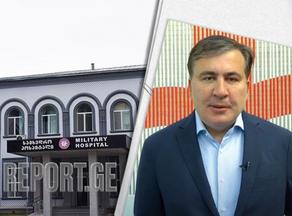 The Special Penitentiary Service of Georgia has released a statement in response to ex-pres. Mikheil Saakashvili's note in which he said the administrative measures that involved cutting the number of allowed visitors and leaving him without a TV set were taken against him.

Following the state agency, Saakashvili made false accusations as the disciplinary measures against him had nothing to do with the decision by the State Inspector's Service.

The statement says that the authorized staff members visited Saakashvili to introduce him to a protocol, but the latter verbally abused them.

The statement goes on to say that no disciplinary measures were taken against the former president at that time, and his allegations that the number of allowed visitors was reduced or his TV set was taken away are lies.

''Herewith, we note that the director of No. 18 facility instituted disciplinary proceedings against the convict on 29 Nov 2021 after it was determined based on an expert's opinion that the price of the item he damaged was lower than GEL 150,'' the statement reads.

At the end of the statement, the Special Penitentiary Service appeals to the ex-president to refrain from releasing false allegations.

Earlier, Mikheil Saakashvili said that he had been subjected to disciplinary measures.