Father of minor Z.Kh. tries to burn himself 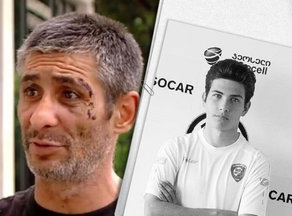 Tamaz Khomasuridze, the father of the juvenile arrested in the case of Giorgi Shakarashvili, tried to burn himself in front of the Prosecutor's office. He was not allowed to do so by the police mobilized on the spot.

Khomasuridze was wearing a medical gown and holding gasoline and a lighter. Law enforcers forced Z.Kh.'s father to leave the area.

He demanded to let him enter the Prosecutor's office. As he said, he will give prosecutors a deadline until the evening; otherwise, he will try to burn himself again.

Khomasuridze tried to self-harm while commenting to the media.

Juvenile Z.Kh. is one of the five accused in the case of Shakarashvili's murder. The investigation accuses him of premeditated murder in a group under aggravating circumstances. Defendants face between 13 and 17 years in prison if convicted.