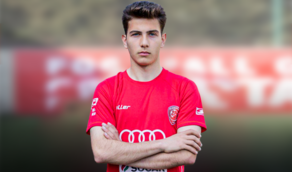 The charges of five passengers of Toyota Camry - Vakhtang Chikovani, Archil Gagnidze, Nikoloz Revazishvili, and two minors in the case of the deceased football player Giorgi Shakarashvili got aggravated. It was announced at a briefing at the Prosecutor General's Office.

"Based on the evidence obtained as a result of a joint investigation conducted by the Prosecutor's Office of Georgia and the Ministry of Internal Affairs, it was established that the quarrel between the guests at a birthday party at a country house in Mtskheta on June 18, 2020, at about 23:00, turned into a physical confrontation. During the party, V.Ch. was beaten and injured.

V.Ch., who considered himself victim in the conflict, returned to Tbilisi, Nadzaladevi district, to mobilize additional physical force for revenge on the opposing side. The friends of V.Ch. remained at the party and periodically provided information about the location of the opposing party.

Upon his return to Tbilisi, V.Ch. got in touch with his friends, and at around 00:30 on June 19, they drove in the direction of Mtskheta in Mercedes and Toyota Camry cars owned by V.Ch.

Due to the physical confrontation, most of the guests at the birthday party left the villa. Among them was Giorgi Shakarashvili, who, along with other people at the party, walked towards Tbilisi. They were followed and watched by the two friends of V.Ch. According to them, the people who came to Mtskheta from Nadzaladevi district in a Mercedes car followed Giorgi Shakarashvili and the people walking on the highway with him.

At the same time, the persons in a Toyota car with V.Ch. went to the country house to find the representatives of the opposing party involved in the conflict. Since none of the opponents were present at the place, the Toyota headed in the direction of Tbilisi.

The examination revealed that the injuries on Giorgi Shakarashvili's body were developed under the influence of some dense-blunt traumatic objects, such as a stick-like object, leg, stone, fist.

In addition, complex expert studies are being actively pursued to determine the issues raised by the investigation.

All five assailants were prosecuted for committing the crime under Article 109, Part 2, Subparagraph E of the Criminal Code of Georgia, which envisages 13 to 17 years of imprisonment.

The investigation established that in connection with the conflict over the birthday party, a total of 8 vehicles left Tbilisi for Mtskheta on the night of June 19, three of them from Saburtalo district and five from Nadzaladevi district. As a result of the video recordings obtained from the investigation and the information requested from the mobile operators, it is unequivocally established that a Toyota car was present at the scene of Giorgi Shakarashvili's premeditated murder and his passengers were involved in the crime. During the investigation of Giorgi Shakarashvili's case, more than a thousand procedural actions.

We want to remind the public that in addition to the five persons charged, 12 persons have been arrested on charges of gang violence, organizing and participating in the same violence, as well as illegal deprivation of liberty. The charges against them are punishable by four to ten years in prison," the prosecutor's office said in a statement.

The investigation into the death of Giorgi Shakarashvili continues under the article of premeditated murder committed under aggravated circumstances.