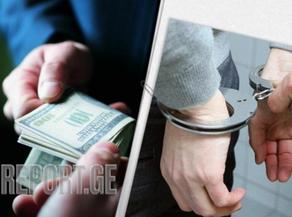 As a result of operative-investigative measures carried out by the employees of the Investigation Service of the Ministry of Finance of Georgia, criminal proceedings started against the three persons on the fact of misappropriation of state property, production, and use of forged documents, bribery, and official fraud.

According to the agency, the investigation established that the accused, a former governor of one of the municipalities of Samtskhe-Javakheti region, in order to obtain personal benefits, in two cases issued false certificates to citizens, based on which they fraudulently registered the plots of land of the Central Park and the former machine-building factory in Ninotsminda, with a total area of 712 square meters, and market value of GEL 39 000.

During the investigation, one plot of land returned to state ownership, while another plot of land has been seized at this stage.

The investigation is underway under the first part of Article 338, Article 341, Part 2 of Articles 180 and 362 of the Criminal Code of Georgia, which envisages imprisonment for a term of 6 to 9 years.