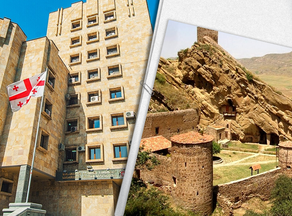 "The General Prosecutor's Office of Georgia has detained two people on charges of acting against the country to transfer a part of the territory of Georgia," the information got revealed at the briefing held at the Ministry.

"The investigation was based on written information received from the Ministry of Defense of Georgia, according to which for years the experts of the State Border Delimitation-Demarcation Commission of the Ministry of Foreign Affairs constantly ignored relevant documents during the state border agreement and harmful decisions were made for Georgia by bypassing them," reads the statement.

According to the Prosecutor General's Office of Georgia, about 60 people were interrogated as witnesses in the case. Dozens of investigative and procedural actions got carried out, which revealed that the administrative border line between Georgia and Azerbaijan changed several times during the Soviet era. However, the two sides finally agreed in 1938.

"After the collapse of the Soviet Union, the need arose to establish a state borderline between Georgia and its neighboring states, and a special governmental commission got established in Georgia in 1994. The task of the commission was delimitation and demarcation of the border between the countries.

In June of 1996, the Georgian and Azerbaijani governmental commissions agreed at a joint meeting that the demarcation line between the two states would be based on 1938 mutually approved administrative boundary line. One of the Georgian government commission members and the head of the group of experts was I. M., and the process was also led by the expert cartographer of the commission N.I.," the statement mentions. According to the investigation, these individuals were obliged to carry out certain works, search for materials, and compile album maps depicting the Georgian border. However, the defendants did not provide the necessary expertise and did not involve cartography specialists in the process.

It is noteworthy that the albums compiled by the defendants included sections of the border agreed upon by them, which was the main guideline for the border negotiation process between the two countries during 2007," the statement said.

According to the agency, in the process of delimitation, I.M. and N.I., while agreeing on borderline, instead of cartographic material from 1938, purposefully used 1: 100,000 and 1: 50,000 scale issued in 1970-80, which had never been mutually approved by the states and was in substantial conflict with historical borders of Georgia.

"And most importantly, the examination revealed that a number of sections of the border between Georgia and Azerbaijan, including 2007, do not correspond to the Georgian border line drawn on topographic maps of 1: 200 000 scales published in 1937-1938, The difference to the detriment of Georgia is about 3500 hectares. Consequently, due to the criminal actions of the accused, there was a danger of losing the territories historically belonging to Georgia," the statement said.

I.M. and N.I. were prosecuted under the first part of Article 308 of the Criminal Code of Georgia, which envisages imprisonment for ten to fifteen years.