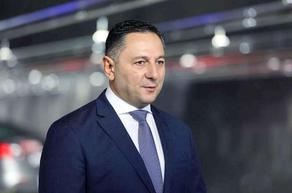 Georgian Interior Minister Vakhtang Gomelauri has made the first comment on the recent Bank of Georgia attack.

The minister has refused to expand on the robber's identity; however, he mentioned that the attacker is a citizen of Georgia.

''As far as I am concerned, the man hails from Georgia's Kakheti region. I wish to thank our staff members and the bank employees, citizens who were inside the building. They carried out the operation perfectly well and avoided bloodshed.

We made all-out efforts to arrest the man without doing him any harm.

He demanded different amounts from half a million to a million.

We have not met any demand of his; we just caught him,'' the Interior Minister said.

LEOs arrested the bank of Georgia assailant around an hour and a half ago.

Earlier, hostages left the bank building, with one of them falling sick.

A gunman broke into a Kvareli branch of Bank of Georgia at around 15:30 today.

The MIA of Georgia has issued a statement saying that all measures are being taken to tackle the issue.