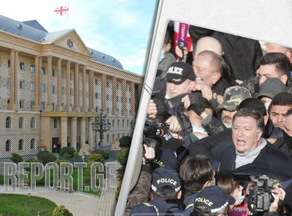 During the ongoing confrontation at the Tbilisi City Court, law enforcers detained a member of the opposition Gigi Ugulava.

The situation aggravated after the police demanded to clear the way blocked by the protesters gathered in front of the court.

Along with him, the police pulled several more people.