Individual arrested on 20 June refused to be released on bail 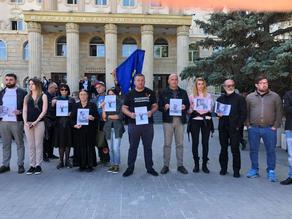 An arrestee with the initials L.J., who was involved in 20 June developments and who claims that his health is being worsened in prison, was refused to be released on bail.

The request by the defendant’s lawyer to release him in exchange for bail of 5,000 GEL was not met. According to Judge Alexandre Iashvili, new factual evidence is necessary for the request to be fulfilled, including a new medical certificate.

The defendant and his lawyer maintain that L.J.’s health is getting worse rapidly; however, the prison personnel refuses to provide him with necessary care and assistance. In addition, according to the defendant, he is the only breadwinner in the family.

The defendant has nothing against home detention, but the Prosecution considers that this will obstruct the normal flow of the process.

Today, on Sept 23, The Tbilisi City Court will discuss the cases of 5 other individuals accused of organizing and participating in group violence.

Today, the members of the Movement “Gavrilov’s Prisoners,” “America’s Supporters League” and the Victorious Georgia Party staged a rally outside The Tbilisi City Court to support those arrested on June 20-21.