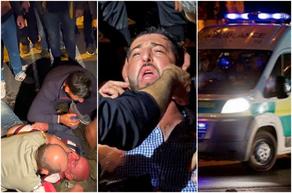 An investigation into the assaults committed in the Marneuli municipality has been launched, Lasha Gogniashvili, the director of the Kvemo Kartli police department, told journalists. No one has yet been detained.

Members of the UNM, GPB's First Channel camera crew and Mtavari Arkhi TV Company staff members were also assaulted in Marneuli a while ago.