Irakli Okruashvili threatened with expulsion by a judge

Irakli Okruashvili threatened with expulsion by a judge 6 December, 2019  17:57 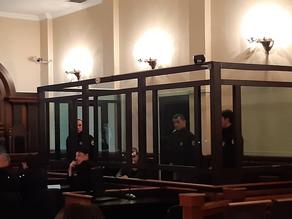 Trial on the case of Irakli Okruashvili is underway at Tbilisi City Court. The former Minister of Defense is also attending the process. The prosecution witnesses are being listened to at today's hearing.

At the trial, Judge Lavrenti Maglakelidze called on Irakli Okruashvili to quit cynicism and answer the questions seriously. The judge was enraged by Okruashvili's statements, saying he wanted his lawyer Mamuka Chabashvili to return.

The trial on Irakli Okruashvili's case has been postponed several times. He refused to attend the process.

Irakli Okruashvili has been detained in connection with the events of June 20-21. The investigation has charged him under Article 225 of the Criminal Code of Georgia, involving the organization, direction, or participation in mass violence.