Judge assigned to UNM head's case refuses to recuse herself 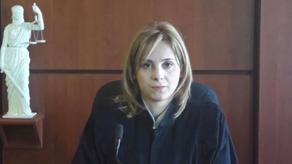 The judge presiding over UNM head Nika Melia's court hearing has refused to recuse herself.