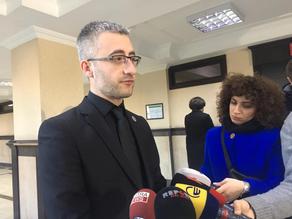 Guga Barbaqadze convicted of murdering Levan Dadunashvili on Khorava Street has testified against Mikheil Kalandia convicted of Davit Saralidze's murder, and another individual known only as G.M.

After the court trial, Prosecutor Mirian Megrelishvili told journalists that the convict questioned as a witness at the hearing said he saw Mikheil Kalandia battering Saralidze with a sharp object.

"Witness Guga Barbakadze has confirmed that he saw Mikheil Kalandia battering Saralidze with a sharp object which he held in his hands. Consequently, the testimony can be regarded as important evidence that can be used by the prosecution. The witness could not name the object, but he described its shape, size and parameters clearly," Megrelishvili declared.

Guga Barbakadze was convicted of deliberate murder of Levan Dadunashvili and was sentenced to 11 years and three months in prison.

Mikheil Kalandia was detained for murdering Davit Saralidze under aggravating circumstances on 4 June 2019 and was sentenced to imprisonment on 6 June.