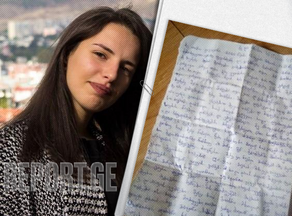 Late Georgian programmer Tamar Bachaliahvili's mother, Teona Tamazashvili, has published a letter of another actor in Bachaliashvili's case. Mrs. Tamazashvili rules out the possibility of the letter being fraudulent.

Another actor Mari Sharashidze has emerged in young Bachaliashvili's case. She claims that the deceased woman asked her to take care of her mother if something happened to her.

Programmer Tamar Bachaliashvili, 23, who disappeared from Ponichala, was found dead on 22 July, four days after her disappearance in the Tetritskaro municipality.

The investigation of the case was underway under the article envisaging the crime of driving to suicide.

On 18 September, at the briefing of the Office of the Prosecutor General of Georgia, drug intoxication was defined as the cause of Bachaliashvili's death.

The family refuses to believe investigators and claims that the young woman was murdered.