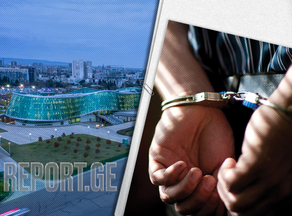 Four people were arrested for physically and verbally abusing TV Pirveli and Mtavari Channel employees during a rally in Tbilisi on July 5. Report.ge was informed by the Ministry of Internal Affairs.

According to them, a total of 7 people have been arrested in the current case.

"Four more have been arrested for illegally obstructing the professional activities of a journalist with threats of violence, persecution with violence and group violence: A.N., born in 1983, T.D., born in 1999, I.Q., born in 1986. and T.Kh., born in 1996.

During the rally against "Tbilisi Pride," the detained A.N. and T.D. in the office of the organization "Shame" on Ingorokva Street insulted a journalist and cameraman of the TV Pirveli while on duty.

The detainees, I.Q. and T.Kh., verbally and physically abused the cameraman of the Mtavari Channel on Rustaveli Avenue, near the Parliament," said in a statement.