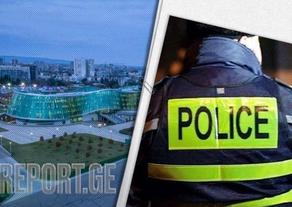 The MIA of Georgia has released information saying that a man (DOB 1972) has been arrested and charged with attacking a Bank of Georgia branch in Georgia's Kakheti region, taking hostages, and illegally owning and carrying firearms.

The MIA says that the assailant broke into the bank branch on Chavchavadze street in Kvareli municipality, Georgia's Kakheti region, took 13 hostages and demanded a large amount.

The police arrived on the spot immediately and held the special operation.

The attacker gradually released hostages, with the police arresting him eventually.

The bank of Georgia attacker has proved 49-year-old Shalva Melikishvili.