MIA releases a statement: We warn the organizers of the rally 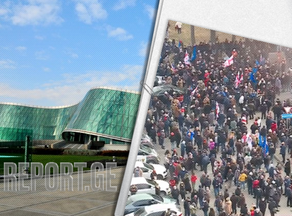 The Ministry of Internal Affairs releases a statement on the ongoing trial in the Tbilisi City Court.

The agency calls on rally organizers, including political leaders, not to allow calls for violence.

The Ministry of Internal Affairs, the body responsible for maintaining law and order, calls on the citizens gathered in front of the court to observe the law during the assembly and expression and to obey the lawful demands of the police. At the same time, we warn the organizers of the rally, including political leaders, not to allow calls for violence so that the rally does not become violent and ensure that the trial of the defendant - Mikheil Saakashvili, is carried out in full compliance with security measures.

Each case of violation of the law will be followed by an immediate and appropriate legal response by the police," the statement said.